Official. Majority of Adverse Reactions are Due to Allergic Reaction to Lipid Nano-particle Ingredients

Are you allergic to anything?

The rushed mRNA serum was the very first time the toxic chemical "PEG" (Polyethylene glycol) has been used in a vaccine, but it was never tested on people who had allergic reactions to the compounds, so how could it ever be deemed as safe? (Reference 1) 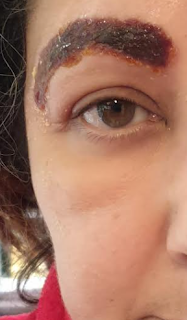 Picture of eyebrow literally 'burnt off and matted with blood'
as a result of exposure to hair dye containing PEG
So imagine the result if that chemical was injected into the circulatory and lymphatic systems?
It would look like this: 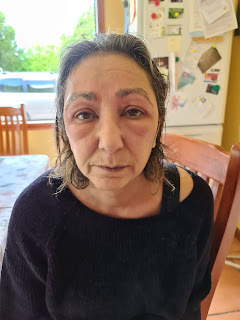 Swelling, bruising, and likely internal damage after the administration of the mRNA Serum which contains the chemical PEG in the Lipid Nano-particle shell of the mRNA delivery system.
This issue has been known since 2016, when scientists investigated the compounds in various products (Reference 2), and it was also known when manufacturing the mRNA drug for emergency use.
The cohort who were allergic to any of the compounds in the mRNA Serum were deliberately excluded from the vaccine tests that gained the emergency approval, and the commonly incorrectly quoted lie that the mRNA vaccine is "safe and effective". (Reference 5)
The Lipid Nanoparticle (LNP) is the delivery system of the mRNA and forms the outer shell. Without it, the mRNA could not be delivered to the cells and the production of protein spikes would not occur.
Post from Greg Kenning from the debate at (https://youtu.be/qFL9mkzpyEI)
"The PEGilated 4 layer lipid nanobubble might cause inflammation in certain people. Originally Drew Weissman, Fauci's former postdoctoral student found that injecting mRNA into mice caused inflammation so they managed to find a solution to make it less inflammatory by exchanging uridine molecules with pseudo-uridine. This synthetic mRNA is now injected into humans both in Moderna and Pfizer Biontech Vaccines. There are no guarantees that the mixture does not cause inflammation at all in any and all people."
The important fact is that Inflammation is the initial result of injecting the known allergen into the human body. Inflammation is the likely cause of most adverse events including death and disability.

Were we told about this in New Zealand?

In a nutshell "NO WE WERE NOT!" People were not made clearly aware of the situation.
This is an excerpt from the original NZ Ministry of Health consent form documentation: 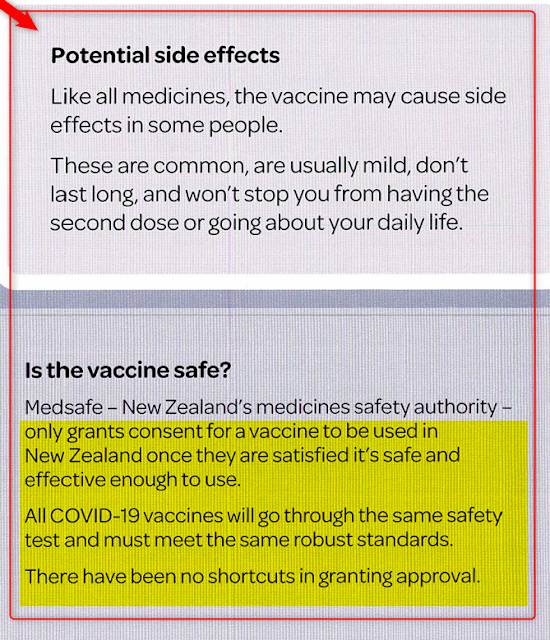 There was a constant reassurance that the vaccines were safe and any conversation contrary to this narrative was minimalised, laughed at, and people were abused by media and many medical professionals alike for discussing their injuries received from the mRNA Injection.
Even though it was stated on the pamphlets that there was a possible issue, when you approached anyone about this issue, it was impossible to get any support for pursuing the idea or receiving treatment.
'There have been no shortcuts in granting approval' is not only factually incorrect, it is misleading and contravenes the Consumer Guarantees Act 1993.
Ref: https://www.consumer.org.nz/articles/consumer-guarantees-act
The guarantees
Under the act, your consumer rights are expressed as a series of “guarantees” a seller automatically makes to you when you buy any good or service ordinarily purchased for personal use. This act was used to replace the "Nuremberg Code 1947" which was established to stop scientists using people as experimental Guinea Pigs, a practice used in the persecution of the Jews in the first and second world war. This 'replacement' of the Nuremberg protection was made during several terms of the NZ Labour Government leadership and most people did not realise it had happened.
In The Act:
Retailers and other suppliers guarantee their goods will:
Did the New Zealand Government know about the cause of Adverse Reactions?
Yes. See Reference 7

I now know that a crime has been committed

What is required to prove that a criminal act occurred?
In general, every crime involves three elements:
1) The act or conduct (actus reus)
Coerce a person to participate in a drug experiment that could cause harm or death without disclosing the commonly available facts and providing appropriate warnings
2) The individual's mental state at the time of the act (mens rea)
Drug recipients were driven to 'fear of death', even though the vast majority of people were safe according to the World Health Organisation; to buy into an untested solution by coercion, to achieve management and control of the population.
3) The causation between the act and the effect (typically either proximate causation or but-for causation)
"Failing to disclose the factual possibility of death or disability upon the administration of a drug, which may cause death or disability now or in the future. Professional Negligence"
And the motivation: Money, Power, Status, Control, Singularity
And if you dig deep enough, and ask a thousand times, you may one day find this information :(Reference 7)

MEDSAFE QUOTE: "Individuals should not receive the Comirnaty vaccine if they have a history of anaphylaxis to any of the ingredients in the vaccine"

Notice the change in wording. "history of anaphylaxis to any of the ingredients in the vaccine".
I have asked call centre staff, vaccine administrators, A&E nurses, doctors, surgeons, and government officials what the ingredients are in the vaccine, in particular the LNP components, and not only did absolutely no one know, even when I pointed out PEG as an issue, they were not aware of the substance or its effect, and ignored the information.
The only person who knew a little was an anesthesiologist who mildly recognised the issue.

Now that we know what is causing most if not all of the adverse reactions, people can now be treated for the conditions correctly. Spread the word.

My family is vaccine injured. I have been working on a Hypothesis and a protocol to deal with the inflammatory condition that most vaxxed people appear to have. A swelling of the lymphatic system and possible leaky lymphatics.

Topic: Polyethylene glycol as a cause of anaphylaxis

Polyethylene glycols (PEGs) or macrogols are polyether compounds and are widely used as additives in pharmaceuticals, cosmetics, and food.

We report on a Caucasian patient experiencing recurrent severe allergic reactions to several drugs. An extensive diagnostic workup including skin prick tests, intradermal tests (IDT) and a double-blind oral challenge was performed to identify the trigger of anaphylaxis. In the present case hypersensitivity to the additive polyethylene glycol was confirmed by an IDT suggesting an Immunoglobulin E-dependent mechanism as a cause of the reaction.

Potential life-threatening hypersensitivity reactions to hidden molecules like macrogol may be under diagnosed. Cases of immediate-type PEG hypersensitivity were reported with increasing frequency. The awareness regarding the allergenic potential of PEG should be raised and a proper product labeling is crucial to prevent PEG mediated hypersensitivity.

Topic:Suspicions grow that nanoparticles in Pfizer's COVID-19 vaccine trigger rare allergic reactions. Life-threatening responses seen in at least eight people could be linked to polyethylene glycol, known to trigger reactions to some drugs

(1) Severe allergy-like reactions in at least eight people who received the COVID-19 vaccine produced by Pfizer and BioNTech over the past 2 weeks may be due to a compound in the packaging of the messenger RNA (mRNA) that forms the vaccine's main ingredient, scientists say. A similar mRNA vaccine developed by Moderna, which was authorized for emergency use in the United States on Friday, also contains the compound, polyethylene glycol (PEG).

(2) PEG has never been used before in an approved vaccine, but it is found in many drugs that have occasionally triggered anaphylaxis—a potentially life-threatening reaction that can cause rashes, a plummeting blood pressure, shortness of breath, and a fast heartbeat. Some allergists and immunologists believe a small number of people previously exposed to PEG may have high levels of antibodies against PEG, putting them at risk of an anaphylactic reaction to the vaccine.

Post-vaccination myopericarditis is reported after immunization with coronavirus disease 2019 (COVID-19) messenger RNA (mRNA) vaccines. The effect of inadvertent intravenous injection of this vaccine on the heart is unknown.

Although significant weight loss and higher serum cytokine/chemokine levels were found in IM group at 1–2 days post-injection (dpi), only IV group developed histopathological changes of myopericarditis as evidenced by cardiomyocyte degeneration, apoptosis, and necrosis with adjacent inflammatory cell infiltration and calcific deposits on visceral pericardium, although evidence of coronary artery or other cardiac pathologies was absent. Serum troponin level was significantly higher in IV group. Severe acute respiratory syndrome coronavirus 2 (SARS-CoV-2) spike antigen expression by immunostaining was occasionally found in infiltrating immune cells of the heart or injection site, in cardiomyocytes and intracardiac vascular endothelial cells, but not skeletal myocytes. The histological changes of myopericarditis after the first IV-priming dose persisted for 2 weeks and were markedly aggravated by a second IM- or IV-booster dose. Cardiac tissue mRNA expression of interleukin (IL)-1β, interferon (IFN)-β, IL-6, and tumor necrosis factor (TNF)-α increased significantly from 1 dpi to 2 dpi in the IV group but not the IM group, compatible with presence of myopericarditis in the IV group. Ballooning degeneration of hepatocytes was consistently found in the IV group. All other organs appeared normal.

This study provided in vivo evidence that inadvertent intravenous injection of COVID-19 mRNA vaccines may induce myopericarditis. Brief withdrawal of syringe plunger to exclude blood aspiration may be one possible way to reduce such risk.

The company excluded people with a history of severe allergic reactions to vaccines from their SARS-COV-2 RNA vaccine trial, according to Pfizer data released by the US Food and Drug Administration on Tuesday.

Participants with a “history of severe adverse reaction associated with a vaccine and/or severe allergic reaction (eg, anaphylaxis) to any component of the study intervention(s)” were not included in the pool of 44,000 trial volunteers.

According to the US Food and Drug Administration's evaluation of the Pfizer data, there was a slight increase in events that may be considered allergic reactions in the vaccine group. The FDA’s independent analysis said “A slight numerical imbalance of adverse events potentially representing allergic reactions, with more participants reporting hypersensitivity-related adverse events in the vaccine group (137 [0.63%]) compared with the placebo group (111 [0.51%])” 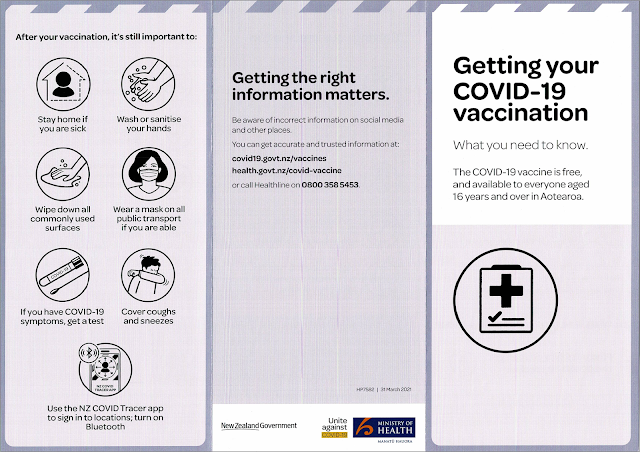 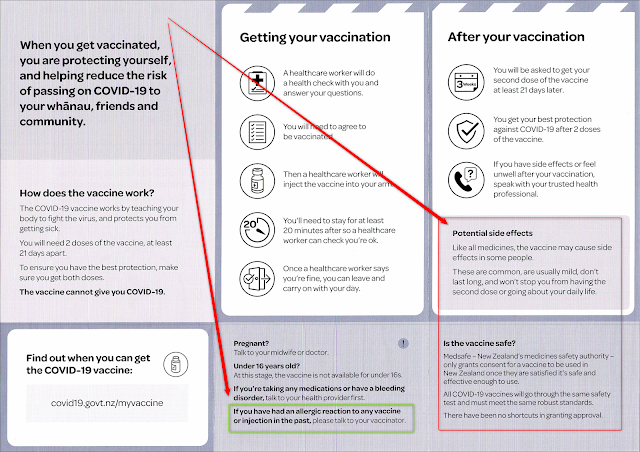 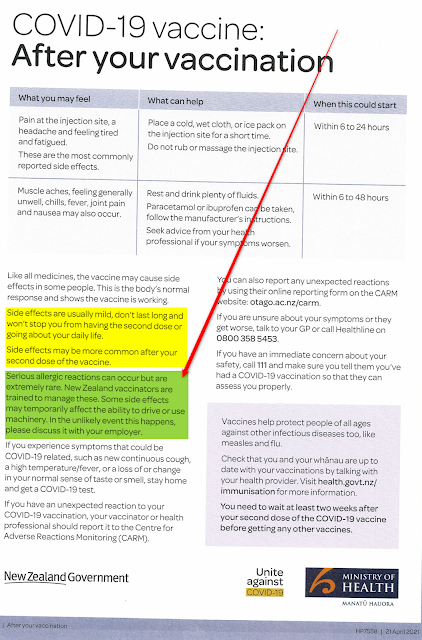 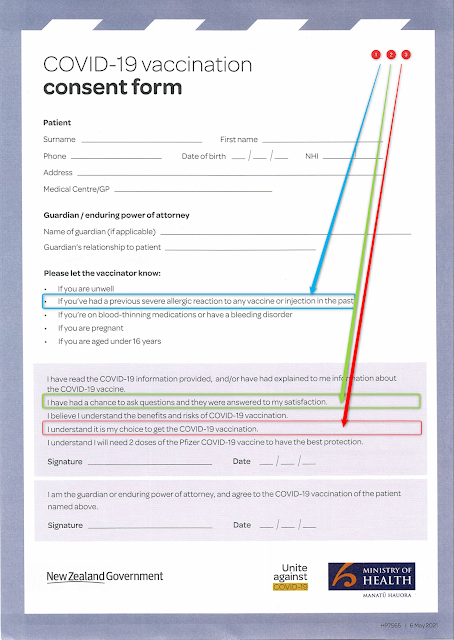 (1) If you have had previous reactions to vaccines or injections does not make it clear enough. The question should be 'If you have allergic reactions' as a person may not remember the results of previous childhood reactions and the statement does not include PEG reactions which is the actual issue because PEG has never been in a vaccine before and is known to be the cause of reaction and not previous vaccines.

(2) The actual information of importance is not known by the trained government administration team, neither is it explained on the brochures or consent form, so how would anyone know?

(3) For many, it was not their choice. They were forced into the decision by the illegal activity of coercion (secret or illegal cooperation or conspiracy in order to deceive others). That is a crime:

Individuals should not receive the Comirnaty vaccine if they have a history of anaphylaxis to any of the ingredients in the vaccine.1,9,10 The vaccine ingredients are listed in the New Zealand data sheet (see section 2 for the active ingredient and section 6.1 for the list of excipients).9

Polyethylene glycol (PEG), also known as macrogol, is an ingredient in mRNA COVID-19 vaccines. PEG is present in many different types of medicines and is recognised as an allergen that can trigger anaphylaxis in some people.1,10–13

Individuals with a history of an anaphylaxis-type reaction to any other substance have an increased risk of an anaphylactic response to mRNA COVID-19 vaccines.10 These individuals can still receive the vaccine but should be observed for a minimum of 30 minutes and be given clear advice on symptoms of anaphylaxis and how to call for help, before leaving the vaccination facility.10

Adrenaline is the first-line treatment for anaphylaxis and should be given without delay as soon as anaphylaxis is suspected.6,14,15