Analysis of the Decisions People are Making

There are 5 absolute facts about our response to Covid:

So what motivates people in their mRNA decision?

Fear and pleasure motivate everyone and regarding Covid, the basis for mRNA injection is:
But these points are not entirely agreed upon by all. They are the popular opinion only and can easily be discredited.
Both parties are making their decision on fear and both are locked into an information war where no ground can be given to the opposition. It's just a rule of the engagement.

Are we looking at this the wrong way?

If you could resolve this 'fear' you could get a unified approach to the pandemic but the more you keep denouncing the other side's opinion; the more the division and both sides will use anything to maintain their position and prove that they are right.
If you are a politician, you are always driven by the popular vote and so Governments will always side with 'main stream' science because it achieves two important factors:
Politicians aren't so much trying to solve the problem, they are trying to avoid the blame and are using  main stream science as its partner which has been lead by Dr Fauci. He is not only a supporter of mRNA, he is actively involved in its development and so he has a vested interest in more ways than one.
People want someone to tell them what to do and the letters 'Dr' are associative with people they trust with their health decisions, so they are already pre-disposed to go with the Dr's advice.
But here is the catch. Go back to the absolute facts and one in particular:
Your doctor cannot answer this question. No one can and so it is ignored.
In fact it isn't just ignored, it is treated as if it does not exist, but yet it does.

Where do Doctors get their advice from?

Once you understand the human body, all you need are the tools to repair it. The doctor's tools come from the drug companies. These companies are always looking at health issues and trying to invent a patented treatment to address the issue and then sell the cure to achieve ongoing profits.
The drug companies do not make money resolving issues by simple natural remedies and so as part of their strategy, they may look at natural solutions for research purposes. But when it comes to the findings, they only promote the synthesized ones. For example; most people's immune system is seriously short of vitamin D which is freely available by standing in sunlight with skin exposed for a few minutes each day. But there is no money in that advice so instead, science creates a drug to emulate what can be achieved naturally and sells it to the people who can afford it or know of the issue.
When your business objective is 'Profit' and your sales staff are Doctors, then the Dr's are going to be told to prescribe drugs and ignore natural health. Only the sale of drugs creates the profit objective and so the term 'Follow the Science' has a constant conflict of interest.
What Is a Conflict of Interest?
A conflict of interest occurs when an entity or individual becomes unreliable because of a clash between personal (or self-serving) interests and professional duties or responsibilities. Such a conflict occurs when a company or person has a vested interest—such as money, status, knowledge, relationships, or reputation - which puts into question whether their actions, judgement, and/or decision-making can be unbiased. When such a situation arises, the party is usually asked to remove themselves, and it is often legally required of them.
Covid and mRNA is the most profitable event to have ever occurred for all concerned in the medical health industry. (+++ 100 billion profit so far). It is not just the pharmaceutical companies making money from this. Everyone connected has suddenly received funding to modernize their operations and provide a service funded by by a seemingly bottomless pit of untethered government funds.
They have absolute control of their customers and they are now in a position of authority like they have never experienced before.
The funding portfolios of politicians in charge of the mRNA rollout decisions in USA appear to be deriving profits from the pharmaceutical industry. The Absolute Truth is that this 'funding' presents a  legally definable conflict of interest and there are rules about this. Why are they not invoked?
Why did the politicians not declare their conflict of interest or let them go? 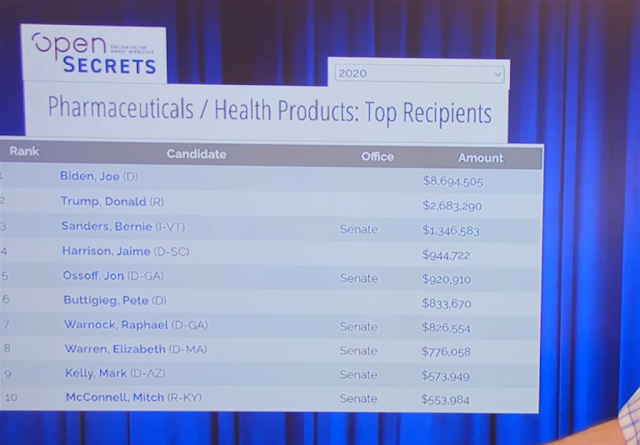 To profit from the misery of others is just not an acceptable behaviour.
The above image comes from the following report:

So what! As long as we are safe!

The evidence from both sides is that mRNA effectiveness reduces.
We saw this with the reduction in efficacy and longevity as each booster shot was administered.
This may be known as overuse syndrome where your system no longer responds to the drug.
For example; the overuse of penicillin has caused many serious problems, including the evolution of 'super bugs' who have learnt how to bypass penicillin's effectiveness, and we now have no remedy in this evolving medical tragedy.
Such superbugs are incapable of being defeated and if they take over a ward or entire hospital, anyone who enters that facility is in serious danger.
This 'superbug' has only been discovered with long term observation. At the beginning of it's release it was not envisaged as being a problem. Years later it is a very serious one, so to say that such tests are not important with mRNA, that is contrary to 'The Science".
If fear was the motivating factor driving people to use the mRNA drug, then where is peoples' fear about creating a super SARS-CoV-2/3/4... virus? All the conditions necessary for this to happen on a worldwide scale are present. If Covid-19 is dangerous, then what is its evolving child capable of?
You could say that it will never happen or you could believe that science will come up with a new version of mRNA to combat it. Before you believe this you may like to ask your Doctor how they see  this issue playing out. To date they have no solution and SARS-CoV-2 got it's name because it is the second time we have seen the profile of this virus and SARS-CoV-3 is undoubtedly in the wings.
The only true guaranteed scientific solution appears to be that people need to develop natural immunity with the natural process available to each and everyone of us:

One question for everyone to ponder irrespective of your position

IF SARS-CoV-3 was to be discovered, will you be taking the injections of the next Covid Vaccine?
NOTE: YouTube fact check everything now so if it is on YouTube, it is factual!
The next vaccine has passed FDA approval based on the science of testing the outcome on 8 mice only. No humans were involved in the trial.
And if you think that the media isn't being controlled, then watch the first few minutes of this report.
Remember, the legal requirement of fact checking YouTube presentations means that these reports are not conspiracy.
And if you think that the vaccine has been fully tested and adverse events are a small statistic, then take a look at the statistics from overseas.
I am doing my best to "Follow the Science" but the outcome is somewhat different than the science being used in New Zealand. I will do my best to fact check this information with NZ Government sources. I no longer work with 'Truth' though. I only work with 'Absolute Truth', a completely different level of information is derived when you make this differentiation.