Everyone may be immune to SARS-CoV-2 by March 2022

Firstly, I want to recognise the speech given today at Wellington by the peaceful protestors.

Science is a section of the community that has been vital to our progress. However, science is also noted as often getting things wrong. Discovery is a process of trial and error and even the best scientists get caught up trying to prove to everyone that they are right.
mRNA has been in development for many years. It has tried to create a flu vaccine since mRNA came on the scene. BUT it has never been successful. So when Covid came along, and Donald Trump opened the cheque book and said to the drug manufacturers that there would be no recourse if they got it wrong; then science had a huge incentive to push its experimental activities into the project. Demand made them release what they thought was the best hope for world wide immunity but let us be very, very clear:
These are three key factors.
When the doses were administered, then the drug manufacturers could do more 'real world' testing where it was discovered that:
But once the promotion campaign was executed, you could never stop it. Irrespective of the actual outcomes, you would need to paint the same picture every day no matter what. "It is safe!" MUST be promoted and any possibility that the public would doubt the mRNA injection results had to be eliminated. There must be no doubt, else people would become confused and the campaign would collapse. A discovery that the mRNA injection was not working could actually cause the collapse of society.
1: Vaccine Timeline Link:
https://www.ajmc.com/view/a-timeline-of-covid-19-vaccine-developments-in-2021
2: The first administration of the mRNA in New Zealand was 19/01/2020
https://www.stuff.co.nz/national/health/coronavirus/300234379/covid19-first-batch-of-vaccines-given-in-nz-with-25-health-workers-getting-jabs
So as the results come in, it appears to be a moderately successful drug. Obviously there will be a percentage of people with issues but just ignore these and keep going. Once released, you have no choice until Covid is gone.
But New Zealand and the world has people in it who will not just accept demands by elected officials. You truly have to consider these people and so the 'Unvaccinated' will be the problem to the campaign.

The problem will be the unvaccinated!

Jacinda Arden is an empath but has to try to ignore her feelings. This is why we can look at the agony she faces as she publicly announces what she has to say. The only way to do so is to 'shut down' her internal empathetic nature. This changes her and she may never go back. She thinks that she is being cruel to be kind. But in realty, she is just trying to follow the advisors recommendations that, at all costs, you must not place any doubt on the vaccine as it could cause a collapse of society.
So here we are, 391 days since the first jab in NZ.
Jacinda has mentally focused her thoughts and feeling that she has done her job for the people only when everyone has been jabbed. She feels that life will somehow return to normal for her once she has achieved this objective. "Do not change direction, stay solid!" is her daily mantra and her advisors all support her in her struggle.

This is not a peer reviewed theory but one that makes sense and fits the situation.
mRNA is not a traditional vaccine. Immunisation is a process of introducing a disabled pathogen to the immune system where it can learn to naturally eliminate the invader. But mRNA doesn't do this. It only generates billions of useless protein spikes. The spike is not a threat and the immune system does not fully activate. It only 'hypes' up a clean up process. A huge influx of internally made protein spikes that will take ages to clean up makes it so that if you catch the virus, your immune system is already trying to clean up billions of spike proteins. If you happen to catch covid, this clean up process simply knocks the protein spikes off the virus and makes it incapable of infecting cells and reproducing and you are protected... for a while.
However, as time progresses and your system completes the spike cleanup, your immune system goes back to a well earned rest and you are vulnerable again. Booster time and your immune system is back doing a big cleanup of protein spikes which are everywhere! You are protected for a shorter time because your body is becoming an expert at spike protein cleanup. It can now do it a lot faster because it knows what to do or perhaps it no longer cares.
So that is a theory but it fits the scenario of what we are experiencing and I put it out there so that we  can visualise a potential situation. With mRNA, no long term natural immunity is actually developed and you are missing out on establishing any natural immunity because your immune system cannot function in its normal manner. Once the spikes are gone you are back to square one.
The only solution is natural immunity achieved through improving your gut biome. Your immunity comes from what you eat, exposure to the sunlight, and general fitness.
Why has the 'natural immunity' been ignored?
Because for the mRNA plan to work, no alternative can be considered.

What do you do?

Everyone is back to square one except for the people who have developed natural immunity (which is actually a lot of people!). New Zealand has probably had Omicron since Christmas and when the numbers are counted, infections will double every day because Omicron is very, very infectious. You only have to walk past someone with it and you can catch it, masked or not. 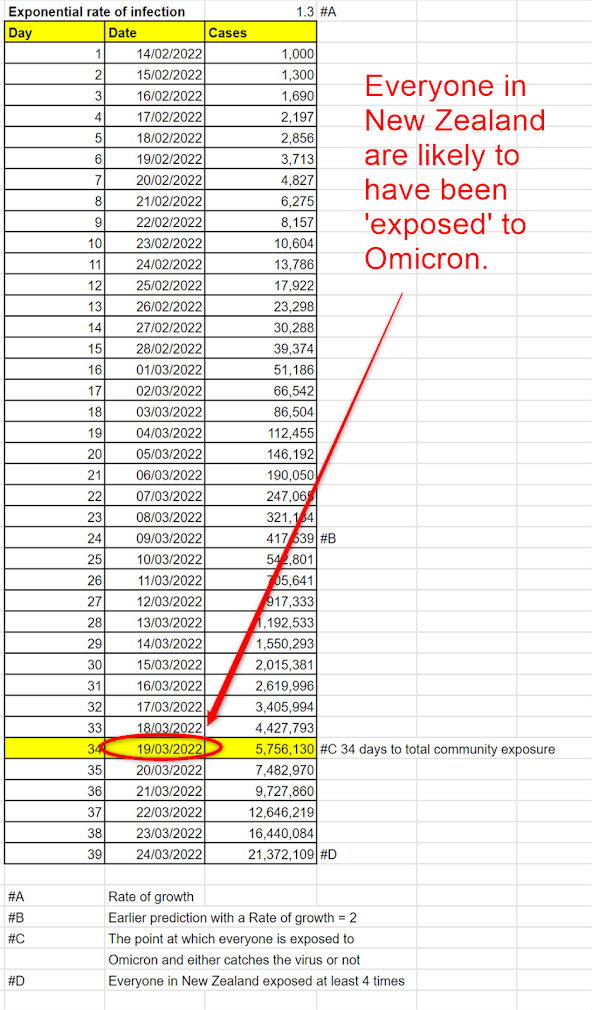 So do you get the boosters in the hopes you can outrun the virus?
Omicron is less problematic. Survival rates are higher. It is more contagious and offers a stepping stone for everyone to develop natural immunity. But can you actually wipe out SARS-CoV-2 with mRNA?
The original SARS-CoV-1 is completely gone from society. No vaccine, no mRNA, just nature eliminated it for us back in 2003 (Link: https://theconversation.com/the-mysterious-disappearance-of-the-first-sars-virus-and-why-we-need-a-vaccine-for-the-current-one-but-didnt-for-the-other-137583
Omicron is the downward stepping stone of the SARS-CoV-2 virus evolution. The hope is that the next variant of the mucosal virus is even less problematic than Omicron. The history of viruses sees them as 3-5 year events where eventually society either adapts to them or they simply disappear.
I do not know how to advise you. If you have had the two mRNA jabs, you may need to get the booster in the hopes that the 2 months of protection that it gives you helps you wait out the Omicron strain.
If you are unvaccinated... sorry... not injected with mRNA, then make sure you improve your immune system as much as possible.
For everyone:
Nature is and always will be the boss.
Be kind, be safe, we are all just trying our best in the best way we know how.
It is nobody's fault and forgiveness is Devine.

Popular posts from this blog

How many at Wellington Freedom March? 9/11/2021 Aotearoa - New Zealand

November 08, 2021
The film below is about 20 minutes long. Voices for Freedom My body, my choice Unjabbed NZ Community 1947 Nuremberg Code 1947 - that we all used to be protected by until 'The Bill of Rights' changed it to what we have now, 'the government can decide' please let me know who else was there.
3 comments
more »

December 03, 2021
Meeting at Memorial Park - Tauranga As I accumulate factual data, it is becoming evident that the 'pro vax' do not actually understand much. They typically see this as an 'Antivaxx movement' perpetrated by the 'crazies'. I ask them about their research and it is truly sketchy what they actually know. The last time I saw people talk like the 'vaxxed', it was when interviewers were asking Republican supporters why they were voting for Donald Trump. They don't know much. For example:  1: They think the mRNA serum is the same as the polio or measles vaccine. FACT: mRNA is a new technology, still under experimentation, that has never worked before.  It is completely different and is NOT a vaccine by definition. 2: They think the mRNA serum is safe. FACT: The serum is released under a 'Provisional Approval,' valid until 3/11/2023  ( Medsafe Approval Link ) It is promoted as being safe because of the number of shots processed worldwide. FACT: The lo
Post a Comment
more »

August 29, 2021
Some Questions 2019 and a 'new' virus is attacking the human respiratory system. It is highly contagious and has a high level of mortality. Questions   Where did it come from and why? How is it transmitted? Why is the virus highly contagious? Why are some infected people recovering while others are not? The immune system would normally defend you but for some it isn't. Why? What makes someone an 'At Risk' candidate? Why are there variants? What are the solutions being presented? What is a vaccine? What are the possible effects of the vaccine? How does the world progress? I know a little, but nowhere near enough. I need to study. What follows is the sequence I used to discover and accumulate the knowledge to form an educated opinion.  I have provided references to the resources to show my appreciation for the people who have spent so much time and effort to help us become educated. We will be developing our opinion from the efforts of many thousands of people.  Take
1 comment
more »